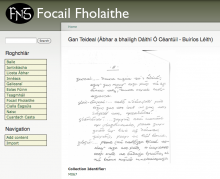 The FNG project, in the Royal Irish Academy, has in its possession a large collection of manuscripts, in which there are Irish words, phrases and notes collected from native Irish speakers all over the country during the twentieth century. Among them is a 500 page collection from Connemara by Tomás de Bhaldraithe (1916–1996), two thousand pages of examples collected by Seosamh Ó Dálaigh (1909–1992) in Munster, and another collection of the same size by Séamus Ó Grianna (1889–1969) in Ulster.